On June 11, 1942, the SS F.W.ABRAMS, through a combination of unfortunate circumstances which include bad weather, a misconception of escort duties, and lack of proper navigational information, strayed into the Hatteras Mine Field and was eventually lost

The F.W.ABRAMS, was owned by the Standard Oil Company of New Jersey.  The tanker had been built in 1920 for the W. R. Grace company and was originally named "Nora".  W. R. Grace sold Nora to the Standard Oil Company (now better known as EXXON) in 1932 and they renamed the tanker F.W.Abrams.  The F.W. Abrams was en route from Aruba to New York with 90,000 barrels of fuel oil when the mishap took place.  Routing instructions had been issued by the British in Orangestad and ordered the F.W.ABRAMS to anchor at Cape Lookout only if the vessel arrived at that position after 1600, otherwise to contact a patrol boat or lightship off Ocracoke for further instructions.  The routing orders did not mention the Cape Hatteras anchorage or more importantly the Cape Hatteras minefield.

Following an uneventful trip north, the F.W.ABRAMS passed Cape Lookout at 1130 on June 10 and continued on towards Ocracoke where a Coast Guard patrol boat directed Captain A. J. Coumelis, of the F.W.ABRAMS, to anchor, which was done at 1830 on June 10.

Captain Coumelis possessed no information as to the United States' coastal defenses, patrols, convoys, or mine fields as he had left the United States in December on charter to the British.  But after his ship had anchored on the night of June 10, radio instructions from the Commander Hatteras Mine Field Patrol to the CGC 484 instructed that patrol craft to provide escort for the F.W.ABRAMS on June 11 "clear of the danger", at whatever time suited the tanker.  Specific instructions ordered the CGC 484 to proceed from the Mine Field south to Hatteras Mine Field Buoy 8 and then advise the tanker to head east for thirty miles at which time they should set their own course

The early morning of June 11 found extremely inclement conditions, and although the sea was moderate, the weather was squally, a heavy fog alternating with rain and visibility in general was limited to one-quarter of a mile.  At 0350, the F.W.ABRAMS made all preparations to get under way at 0415, with anchor aweigh, the ship departed from the anchorage under the guidance of the Coast Guard patrol craft.

The tanker began to follow the escort but rain squalls reduced the visibility and the tanker crew lost sight of the escort.  Captain Coumelis had not seen his escort for approximately 20 minutes when the first explosion occurred.  There had been no warning except for a slight premonition in the form of illusion shared by the captain and the third mate, both of whom were on the bridge.  Both thought they had seen the wake of a torpedo immediately before the explosion

The first explosion occurred approximately 12 feet from the starboard bow halfway between the keel and the waterline.  A certain bewilderment was manifested on board the F.W.ABRAMS when it was not known whether the ship had been attacked or had struck a mine.  A sounding was taken which indicated the water to be 17 fathoms deep and although an attempt was made to drop the anchor, a cable caught on a windless pawl and the operation was unsuccessful.  The engines were shut off and the ship drifted.  Five minutes after the explosion, a SSS message was transmitted and for nearly an hour thereafter, the radio operator was in constant touch with Navy shore stations.  The whistle on the tanker was blown until steam was exhausted but no assistance was forthcoming

At 0739, the third explosion occurred on the starboard side between the bow and the bridge and at this time, the vessel sinking slowly by the bow, was abandoned by all hands in the three remaining lifeboats.

All of the remaining members of the tanker's crew of 36 men left the ship, and subsequently reached shore safely at Ocracoke Inlet from where they were transported to the Marine Air Station at Cherry Point.  The entire crew was American except the two Filipinos and one Spaniard.  The only injury sustained as a result of the unfortunate incident was a dislocated ankle and a broken arm suffered by Hanley, an able bodied seaman who had been on watch near where the first mine exploded.

At 1755 on June 11, as the weather cleared, the battered hull of the F.W.ABRAMS was observed with her forward half submerged and apparently on the bottom, at a reported position of 34-58N : 75-48W, drifting to the north.  The last known position of the derelict was reported on June 13 to be 35-50N : 75-45W, completely submerged.

It was indeed a mine that destroyed the F.W.ABRAMS and she was not the only vessel to be lost to the Hatteras Mine Field during the war.  The vessel KESHENA met a similar fate and also lays on the bottom nearby.  The F.W.ABRAMS now has 80 feet of water covering her resting place.  Because she was a large vessel and a hazard to navigation, the tanker was depth-charged and wire dragged, flattening the wreck and spreading the amidships section out over a wide area.  The military pilots in training from Cherry Point also used the Abrams as a bombing target as her masts protruded from the water. 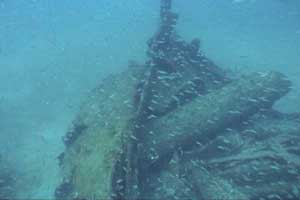 The stern, which is the most visually interesting section to dive, is well defined with both Port and Starboard sides of the hull visible.  The fantail is settled into the sand so deep only the tops of the rudder and prop are seen, but the engine still sits upright on it's bed and rises almost 20 feet from the bottom.  Some sections of the engine have recently fallen to the starboard side, but the majority of the engine still stands upright.

Ahead of the engine are three boilers all in their original positions nested close together.  Forward of the boilers the wreck becomes less distinct and divers must use careful navigation skills if they are not to become disoriented.  Wide sand breaks divide the wreck into three main sections, with just enough distance between them to make it sometimes difficult to navigate between them.  If the visibility is over 60 feet, a diver can see from the stern section to the amidships portion of the wreck and swim the gap without problems.  The gap between the amidships and the bow section is not as wide and almost not noticed during a dive. 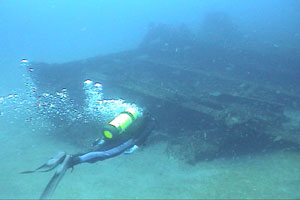 The bombing and wire dragging did a very good job in the midsections of the Abrams as they are a disorganized pile of beams, steel plates and ladders.  The sand break between the mid-section and the bow area is smaller and less distinct than the break between the stern.  The bow area is also rather jumbled until you reach the actual bow where the general shape is still clearly defined.  Divers will clearly see the large anchor winch, chain pile and port side of the bow.  The bow section normally holds a great deal of fish life as it provides a jumble of plates and beams under which the groupers, snappers and other fishes can hide.  Below is a detailed sonar scan of the entire wreck created by the NOAA SRVX vessel during their summer of 2013 survey of the site.

This wreck is known for it's varied sea life that includes large rays, cobia, grouper, octopus and turtles.  We have also encountered schools of dolphins at this site many times as well as an occasional Manta Ray.  The F. W. Abrams is the closest large wreck to Hatteras Inlet and therefore frequently visited by divers.  We are often able to reach this dive site even if the weather is rough as it is only ten miles south of the inlet.  Of interest is the fact that the F. W. Abrams was built in the same shipyard as the tanker Dixie Arrow and now both lay on the bottom not five miles apart....